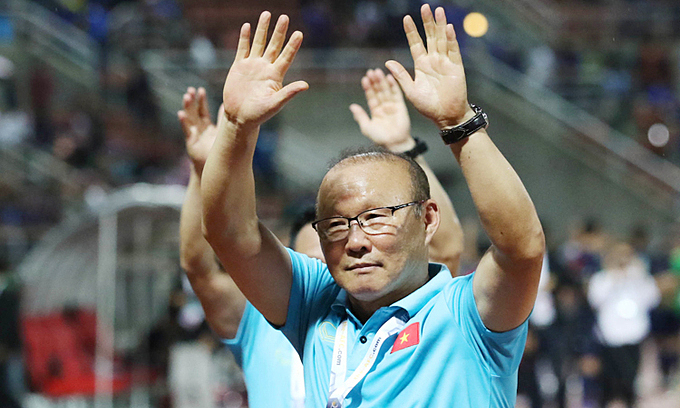 Park told the media recently the goal for 2021 was to defend both AFF Cup and SEA Games 31 (hosted by Vietnam) titles. The national team won the AFF Cup in 2018 and the U22 team won SEA Games gold medal last year.

Besides, Park aims to become the first coach to take Vietnam to the final round of World Cup 2022 Asian qualifiers.

A further goal involves scoring a slot in the group stage during AFC U23 Championship 2022 qualifiers.

The Golden Dragons will return to play Malaysia between March 22 and 30 during World Cup qualification. FIFA will allow a maximum two matches to be played during this time, so chances are Vietnam could play its next game against Indonesia in March or between May 31 and June 15. It will also play its final group G match against UAE.

With all international tournaments postponed for 2020, Vietnam will be unusually busy next year since it would take at least 95 days for the national and youth teams to complete their international duties.

To spare players, Vietnam Football Joint Stock Company (VPF) has decided to retain the V. League 2020 format for next season. Fourteen teams will compete normally in the first leg and divide into two groups in the second, with group A consisting of the top eight teams playing for the title and group B with the bottom six fighting relegation. This way, V. League will be able to end sooner to create more time for the national teams to prepare their campaigns.

Due to Covid-19, the Vietnamese national team and youth teams will have to wait until 2021 to play again. The Golden Dragons have yet to train together this year while the U22s trained twice to scout new players ahead of SEA Games 31 hosted in Vietnam next year. They will have another training after V. League 2020 concludes.

Vietnam will need to score a minimum seven points in the remaining three matches to advance to the final round of World Cup 2022 qualifiers.

In pics: SEA Games mascots over past decade